Porsche Boxster S is Autoweek’s Best of the Best Car

The Porsche Boxster S continues to assert itself as the premiere sports car of 2013 as Autoweek awarded the mid-engine sport car the magazine’s Best of the Best/Car honor.

After narrowing the Best of the Best/Car contenders to five all-new 2013 models, Porsche was the only brand awarded two spots on the publication’s list of finalists – the winning Boxster S and the recently redesigned 911. Other contenders included the all-new Subaru BRZ, Dodge Dart and Cadillac ATS.

Ultimately, like other publications, the Boxster S’s beauty and balance earned it the top award. As Autoweek explains, a number of factors helped the Boxster S win the coveted Best of the Best/Car award, “including the ultra-flexible engine, stable rock-solid chassis and an inherent eagerness—a crispness no other car in the field could quite match.”

Armed with a 311 horsepower 3.4-liter flat-six engine, the Boxster S is both larger and more stylish than its predecessor. To see the award winner visit South Centre Porsche, and to read what else Autoweek had to say about the 2013 Boxster S visit autoweek.com.

Filed under Porsche, What Our Friends Think

2013 Boxster Named “Design of the Year” by Automobile Magazine 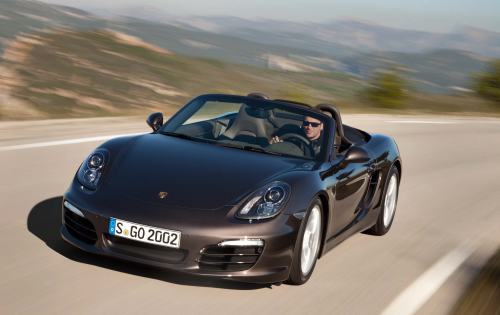 “There’s a good reason I keep a 1:18-scale model of the 1993 Porsche Boxster concept car sitting on a teak cabinet in my studio,” writes Automobile Magazine’s Robert Cumberford, “it’s gorgeous, the first Porsche to bring the spirit of early Porsche 550 racing cars to the road.”

Cumberford acknowledges that the first- and second-generation Boxster’s design never appealed much to his sense of style; however, twenty years after the original Boxster concept, the all-new 2013 Boxster’s design managed to “wow” Cumberford and the rest of the Automobile Magazine staff enough so that the magazine is gracing the two-seat Porsche roadster with its “2013 Design of the Year” award.

With its sleek looks the 2013 Boxster possesses a style that is distinctly Porsche, yet decidedly unique to the Boxster model line. Unlike the first-generation Boxster, the 2013 model will not be confused for a 911.

Available with a 2.7-liter 265-horsepower flat-six engine, the standard Boxster will take the roadster to 100km/h from rest in just under six seconds. Moving up to the Boxster S puts a 315-horsepower 3.4-liter flat-six engine behind the driver’s head. Equipped so, the car’s 0-100 km/h time is shaved to a tick over five seconds.

Whether paired with Porsche’s responsive six-speed manual transmission or the quick-shifting PDK semi-automatic gearbox, Automobile Magazine’s “2013 Design of the Year” winner is arguably more fun to drive than it is to look at.

If Cumberford doesn’t purchase a 1:18-scale model of the 2013 Boxster to sit next to his 1993 model, we’ll understand. After all, a car of the Boxster’s caliber can only truly be appreciated as a full-size model sitting in your home’s garage. To see the 2013 Porsche Boxster’s stylish design stop by South Centre Porsche today.

Filed under Porsche, What Our Friends Think