From the outside, the Porsche Classic house appears to be a minimal warehouse. But step inside, and Six 959s, a Carrera GT, a 550 Spyder, an Abarth 356, a Super 90, to name a few, can be found on the floor. Interestingly enough, every one of the cars in the facility were sold to consumers, driven around the world, and eventually found their way to the Stuttgart sanctuary.

Porsche Classic itself is a division of Porsche AG that manages and caters to, well, owners of classic Porsche models. It offers components to customers looking to restore their old Porsches street cars of ten years old or more, along with in-house restoration services.

And in terms of longevity statistics, just over 70 percent of all Porsche models ever built are still registered on the road — which speaks volumes in terms of value and owner care. Porsche owners from all over the world will even send their classics to the Porsche Classic house for routine maintenance, or even to be fully restored.

But if sending a Porsche to Stuggart for fixing up seems a tad steep, all Porsche dealers possess allocation to order whatever part a classic Porsche owner needs— a selection of roughly 35,000 parts. Though if sending the classic model over is an absolute must, owners can rest assured that their car will be carefully, thoroughly, and passionately touched up by workers who share the kind of devotion and affection for the brand that exceed expectations — some with over forty years of experience in the company — with specialists for just about everything imaginable when it comes to the Porsche family.

Just how thorough and intricate is the restoration process? It’s so detailed, that Porsche even revisits the old manufacturing processes and tooling used relevant  to whatever model being maintained or restored. And in doing so, the model in question actually retains its value greater than a typical, random shop job. And that alone makes Porsche Classic amazingly special.

Porsche has launched an app for all smartphone-using Porsche owners to tap into the social networking realm with the Drive + app for the Apple iPhone, iPod touch and iPad.

With the Drive+ app, Porsche owners can upload media of taking Porsche out for a spin, while viewing a new model at an auto show, or even watching a Porsche race around a track. This brings the Porsche community together in ways that were previously unimaginable.

There are several functions to the app, including:

Picture quickly slicing through the mountain roads in an all-new 2013 Porsche Boxster S, stopping for a meal somewhere in between. Using the Drive + app, a photograph can be taken and uploaded, while sending out a message seeking out other Porsche drivers who would like to join in on the fun.

Perhaps it’s a track day with the new 911. A video of the high-velocity excitement can be taken and then uploaded in between hot-laps, along with a status update inviting friends to come on out. We’ve all thought it would be cool to integrate social media into such a hobby as driving. Now through Porsche, we can.

At the recent ModSpace American Le Mans Monterey Race, Porsche rolled in with the 911 GT3 R Hybrid and delivered quite the beating to every car in the GT class as drivers, Romain Dumas and Richard Lietz, finished 10th overall. Not only did Porsche’s gas-electric superstar post the fastest lap, it made just three pit stops in the six hour event, compared to the five everyone else made. Porsche is changing what everyone thinks about hybrids by proving gas-electric technology can haul ass and save gas.

“The start phase was huge fun, because it was relatively easy to overtake the slower competitors,” Dumas said after the race. “But it’s even more fun because we can apply superior tactics thanks to the lower fuel consumption. We are much more flexible and we made the most of this day.” It was the car’s first appearance on the West Coast (and only its second in North America since it debut last year.)

Based on the 911 GT3 R, this hybrid isn’t a traditional hybrid in a sense that it uses a kinetic energy recovery system, and instead of a battery, the energy is stored in the flywheel. The system store 0.2 kWh of energy, which is enough to provide an additional 150 kW (203 horsepower) for an eight second burst. “That doesn’t sound like much, but the system recharges quickly,” said Dieter Steinhauser, head of motorsport R&D. “For performance applications, a battery recharges too slowly.”

The 911 GT3 R doesn’t fit into any one of the five classes in American Le Mans, therefore it essentially is an experimental car. Which means, it cannot participate in qualifying and must line up in the back of the grid. The car started in 35th which makes the climb to the 10th spot that much more impressive.

“It’s a shame that we weren’t permitted to join the qualifying, we could have done with the extra practice for finding a good set-up,” Dumas said. “I last drove the car at Road Atlanta. Compared to last year’s version, the 2.0 has made huge progress.” The hybrid system in version 2.0 weighs 120 kg, 50 less than the first generation. The electric flywheel is about 90 percent efficient, and the hybrid delivers a 10 percent improvement in fuel economy over the conventional 911 GT3 R race cars. Porsche also reduced the weight of the car, which comes in at 1,300 kg.

So far the 911 GT3 R Hybrid is just a showcase for Porsche’s Intelligent Performance advanced drivetrains, but a similar system will be available in the gorgeous 918 RSR race car. Porsche hopes to see the American Le Mans Series create a classification for hybrid drivetrains in time for the 2014 season. 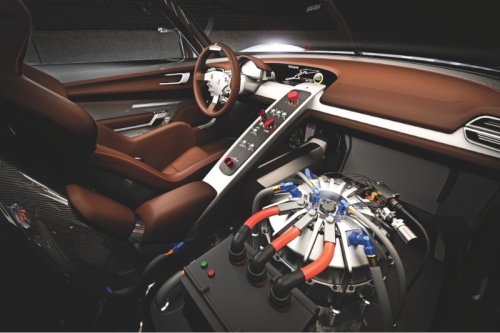 The 918 is an evolution of sorts, it takes the flywheel hybrid system first used in the 911 GT3 R Hybrid with so much success at the Nurburgring, Petit Le Mans and the Shanghai circuit for the final round of the ILMC series, and puts it into Porsche’s latest Supercar, the 918.

The 918 RSR has a carbon fibre reinforced monocoque chassis to create a chassis that is incredibly stiff. The V8 engine is an evolution of the from the RS Spyder race car and now puts out 563 horsepower at 10,300 rpms. It is augmented by two 75kW motors (150kW total or 201hp), one each on the front two wheels, to provide a total power rating of 767 horsepower!

Power for the electric motors comes from regenerative breaking, that energy is stored in a flywheel accumulator, rather than heavy batteries. The flywheel accumulator is an electric motor which spins at up to 36,000 rpms. That stored power is available to be used at the push of a button by the front wheels through a torque vectoring system to provide more drive out of corners and aid in handling.

The additional power is available for around eight seconds when the system has a full charge. Unlike battery technology, a full charge can be regained in just one or two hard breaking corners with the flywheel accumulator, it also weighs several hundred kilos lighter than a battery system as well, and as we all know weight is the enemy in racing.

To illustrate how the system works lets break it down into segments
Number one, step on the brakes to create the kinetic energy that will be sent into the flywheel accumulator.

Number two, the two electric motors take the energy from the brakes, and generate an electrical current that is sent to the flywheel accumulator.

Number three, inside the box that resides where the passenger seat normally would is the flywheel accumulator. The flywheel which is made from carbon fibre, is in a vacuum so that there is little to no drag for maximum efficiency. The flywheel is loaded with rare earth magnetic materials and when the energy from the electric motors reaches the flywheel it spins the system up from an idle speed of 20,000 rpm to 36,000 rpm. That energy is then stored till called upon.

Number four, power. When extra power is needed to exit a corner, pass a competitor, or stretch a fuel window a button is pushed and the power from the flywheel is dumped back to the electric motors in the front which then powers the front wheels.

Number five with the flywheel having expended it’s energy, the process can start all over again.

With the new 918 RSR racing laboratory, Porsche is now elevating this motor racing hybrid concept to an experimental level. In the 918 RSR, “Porsche Intelligent Performance” equates to research into methods for further sustainable efficiency improvement under the intensified conditions of the race track, lap times, pit stops and reliability – a metric in which Porsche has been demonstrating its success for over 60 years.

Filed under What South Centre Thinks