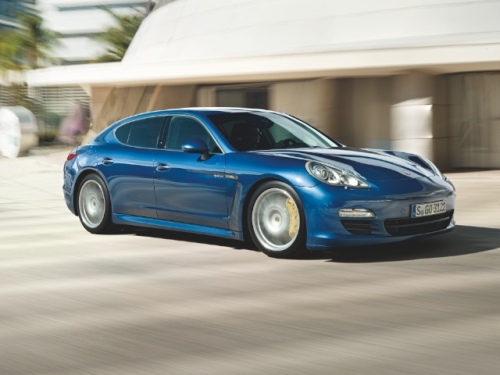 The Michelin Challenge Bibendum is the world’s premier forum for sustainable road mobility. Since 1998, Challenge Bibendum has showcased technological advances and test-driven the latest and fasted in clean vehicles all over the world. Held in Berlin this year, the new Porsche Panamera S Hybrid and the 911 Carrera captured the two top spots. The double win by the two Porsche models demonstrate that the optimum blend of efficiency and driving dynamics is capable of winning even a competition with a sustainability criteria. It’s no surprise that, with its parallel full hybrid drive system, the Panamera S Hybrid won the intercity rally and the second place finish of the 911 Carrera with a conventional combustion engine proves that Porsche models are fundamentally efficient vehicles.

The two Porsches were pitted against 14 other contestants in the combustion engine driven production vehicle category that judges both vehicles with conventional diesel and gasoline engines as well as hybrid and plug-in hybrid models. Acceleration and lap times on the 300 km (186 mile) course were measured as well as fuel consumption. There were also a number of regularity tests performed along the way.

With CO2 emissions of 159 g/km, the 380 hp Panamera S Hybrid boasts the lowest emissions of any model in the entire Porsche lineup. That equates to fuel consumption of 6.8 l/100 km based on the European rating. These values were achieved with optimized rolling resistance Michelin tires, which are available as an option. But even with standard tires, the new Porsche hybrid model’s fuel consumption is at an unprecedentedly low level in its class at 7.1 l/100 km, again, based on the European rating.

Read more about the Michelin Challenge Bibendum to learn more about about its goals and initiatives. Follow us on Twitter and join our Facebook community to keep up with the latest updates. Also, contact us today to book a test drive of either the Panamera S Hybrid or the 911 Carrera, or maybe even both!